Here is a link to the train wreck info:

Email ThisBlogThis!Share to TwitterShare to FacebookShare to Pinterest
Here is a link from the New Brunswick Railway Museum about the wreck:
Posted by Val at 11:24 AM No comments:

Both men worked for the California-based Al G. Barnes Circus. Johnson was part of the canvas crew and looked after the five large tents that housed the show. MacFarlane was a prop man and responsible for the equipment that performers needed while putting on their acts.

Circus work was heavy work and moving the tents, performers and animals between venues was slow and difficult until the development of the railway.

Linking Canada by rail with the United States allowed the large American circuses to include Canada on their summer tours and, by 1911, there were 32 shows touring the two countries.

Ringling Bros. and Barnum and Bailey were the largest, using 100 railcars in the early 1920s to carry the tents, animals, set-up crews and performers for each show. Because railways were the chief means of transportation, train accidents were a constant worry.

P.T.Barnum's Greatest Show on Earth stopped in Moncton in June 1879. There were two daily shows and adult admission was 50 cents. Children under 9 paid half fare and if you wanted a reserved seat it cost 25 cents extra. Barnum set up on 'The Common,' which today is the site of Edith Cavell School.

Circuses travelled at night, enabling them to arrive early in the morning at their destination. Wagons containing equipment and tents travelled in flat cars, the animals in cattle cars and the staff in coaches.

The cars were owned by the circus with the locomotive, caboose and train crew belonging to the railway.

On Sunday, July 20, 1930, the Al G. Barnes Circus was on its way from Newcastle to Charlottetown. They planned to stop in Moncton on the way back from Prince Edward Island. They were late getting loaded in Newcastle because one of the elephants didn't want to get into his car.

The train consisted of 29 cars. When it passed Canaan Station, the 18th car jumped the rails and it and the remaining cars piled into a tangled heap.

The animals were in the front car and were not injured. About half of the circus wagons were destroyed. Two circus staff and another person who was hitching a ride on the train died immediately and two died later at The Moncton Hospital. Seventeen others were injured and taken to hospital.

Within a day, the derailed cars were back on the track and brought to Moncton. An investigation deemed the wreck unavoidable due to a faulty arch-bar on the first derailed car.

The undamaged section of the show was taken to the Fair Grounds in Moncton (later CFB #5 Moncton). The circus crew unloaded what was salvageable on Main Street (later the CN Terminal Building parking lot) and went to work repairing the tents and equipment.

The show in Charlottetown was cancelled. However, in true show business spirit, the performers gave Moncton a show that more than filled expectations. The big tent was packed with spectators and circus staff gave special thanks to Monctonians for their sympathy and kindness during and after the disaster.

The next day a funeral service was held for the four dead men. Mourners spilled into the street at the funeral home and hundreds lined Main Street as the funeral cortege passed. The procession was led by the circus tall man followed by the circus band. The pallbearers were circus staff dressed in their blue and white uniforms.

Albert Johnson and 'L.D.' MacFarlane's relatives were not located and their circus family buried them in Moncton. For many years later a memorial service was held for them when the circus came to town. 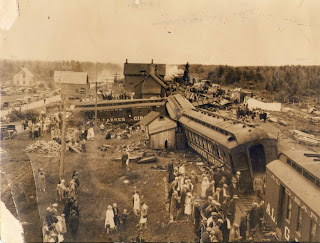 Photo from Melinda Patrick
Posted by Val at 9:30 AM No comments: 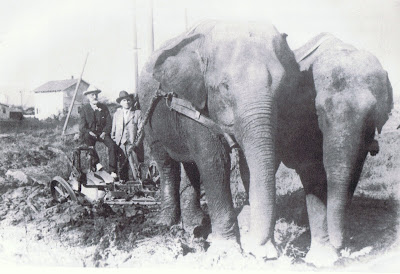 Al G. Barnes with Abbott Kinney for what some say was a publicity stunt. Kinney was the founder of Venice of America where the Barnes circus wintered from 1911 until 1919. 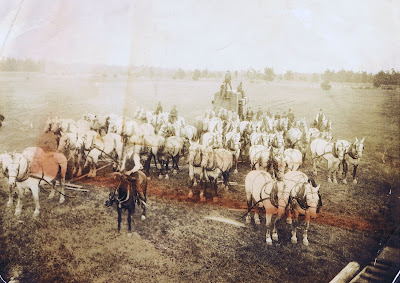 There was no writing on the back of this photo, so I am not sure if this is Ringling or Barnes. Casper also worked for Sell-Floto in 1910. The original is in poor condition, so this is the fixed version. 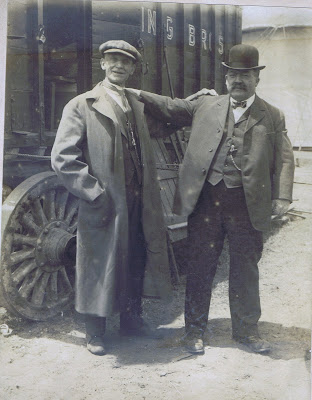 On the right is Otto Ringling. The man on the left I do not know.
Posted by Val at 9:14 PM 1 comment: