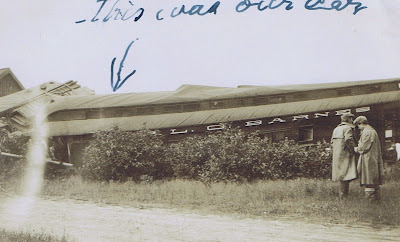 Grandpa was in the car where he marked. He sent this to my grandma.

My grandmother and her sister probably knew your grandfather. They were with the Barnes Circus and Christie Bros and more. I have photos but will have to dig them out and share them with you.
I also just came across a poem in my grandmother's stuff that was written about the wreck and will post it here for you:

ON WITH THE SHOW

'Twas at Canaan Station,
In the month of July,
That Al Barnes' Circus
Was due to go by,
When all of a sudden
Some cars left the track,
And many were injured,
Four ne'er to come back.

They had just played Newcastle
Before the mishap
And had loaded as usual
And gone for their nap
Many sleeping inside
On account of the rain,
Or more would have been killed
On that ill-fated train.

Doctors and nurses
From Moncton did go
To render first aid
To that might show;
And the ones that were kiled
And those that were crushed
In a C. N. R. Special
To Moncton were rushed.

But "on with the show"
Regardless of cost,
And that's what they did, boys,
Minus their loss;
And everything billed
Is waht we did see,
And a wonderful circus,
Now take it from me!

Now you have the story
Of the Barnes Circus wreck.
May God bless them all,
With Moncton's respect.
If they ever return
Let's go to see
A circus that's known
For its honesty.

I live in Canaan Station. I actually live next to where the crash happened. I am just researching it and came across this poem.

I came across a photo of the wreck recently and am posting it here. On the back my grandmother wrote:
"Taken on the Al G Barnes Circus July 20, 1930. Six men killed. Seventeen hurt in Camden N.B. Canada. Al G. Barnes Circus. Henry Emgard sideshow mgr. Adamae Emgard, Gladys Forrest, Chas (Charlie) Forrest in wreck."
Gladys is my grandmother and Adamae is her sister.